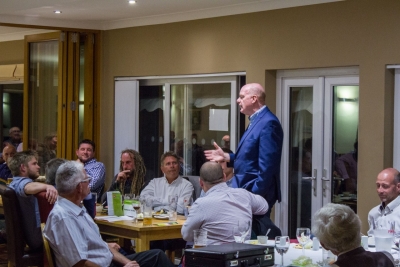 Friday 19th August saw Cradoc GC welcome back the Tourettes for their annual Charity day, this was the tenth year that this has been run and it has proved successful yet again with £3,500 being raised, which when added to the past years the overall total is nearing £40,000 for charitable organisations.

Although the forecast was looking very poor at the start of the week the rain stopped just as the players were heading towards their tees and although a few teams had some drizzle as they finished their rounds the majority played without getting wet.

A very close podium saw the top three only separated by a single shot which got them all thinking about the putts that didn’t go in, Touchdown Design won the inaugural day and with winning this one they have finished as they had started on winning form.

Once everyone was off the course they all freshened up and returned to the clubhouse to enjoy the hospitality that had been organised for the evening, after having a sumptuous 3 course meal the patrons relaxed back into their chairs and listened to the guest speaker Phil Steele. Phil got into his routine very quickly and soon got the room buzzing with tales of his travels, some jokes and also some off-the-cuff one liners which lightened the mood before the more serious business of the Charitable Auction.

Once again Cradoc’s very own auctioneer Ryan Williams was the man with the hammer and everyone in the room was wary of any unintentional movement which could be construed as a bid, but as he bought the hammer down on the last lot it was clear to see that the generosity of the people in the room had made all the effort worthwhile.

Well done to all those involved in the organisation of the day and although they have said this is the last one, they also said that last year.

Results for the day:

More in this category: « Men's Stableford - Sunday 14/08 Wedding Day at Cradoc GC »
back to top