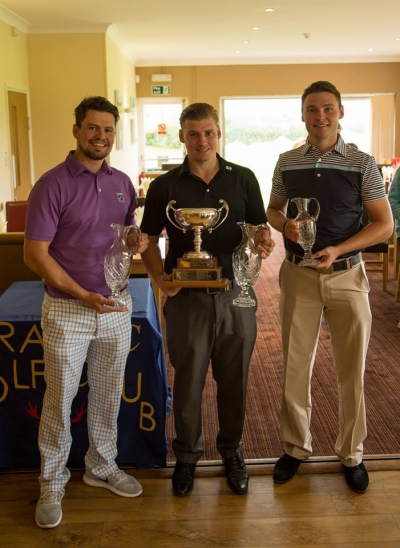 Cilgwyn's Chris Regan holes-in-one, but Glamorganshire GC's Jordan Price-Davies shoots an impeccable 68 in the rain to win a shortened 2016 ToC

Saturday was the 38th running of the Tournament of Champions, sponsored by Molson Coors, where each club Champion from across Wales competes to become the Champion of Champions.

This year the weather that greeted the 47 players started off grey and as the day wore on it got gradually worse with some greens holding water and others having to be dried by the groundsmen and volunteers.

With the forecast showing no improvement and possibly getting worse a decision was made that no further play would take place on the day and the tournament would be over the first round scores.

Defending Champion Lee Jones made a good defence of his title shooting a 1 over par round but it was only good enough for 4th place with Kieron Harman beating him on the back nine and Luke Thomas claiming 2nd with a 1 under par round of 70 but it was Jordan Price Davies who shot a impeccable round of 68 which was without fault as he had no bogeys on the card.

In his speech, Club Captain Dave Matthews thanked all those who helped to organise the day, from the members who started the players, those that were out ball spotting, the golf committee who did all the organisation before and on the day, Keith and Madalena in the Office, the Kitchen, the Pro shop and Bar Staff. A special mention was made for the Greens staff for all their hard work through the summer and especially for their efforts over the past week preparing the course for today.

In his acceptance speech, Jordan stated he 'was over the moon to win' thanked both the Club and the sponsor Molson Coors for putting on a fine event, praised the staff on the condition of the course also, and already looked forward to returning in 2017 to defend his newly acquired title.

We hope all the players enjoyed their day and we look forward to you returning next year where hopefully we can provide better weather.

Congratulations also went to past ToC winner Chris Regan of Cilgwyn GC who achieved a hole-in-one on the 7th hole!

All scores can be viewed in the attached file

Download attachments:
More in this category: « Tournament of Champions 2016 Draw for Play 666 Resuts »
back to top