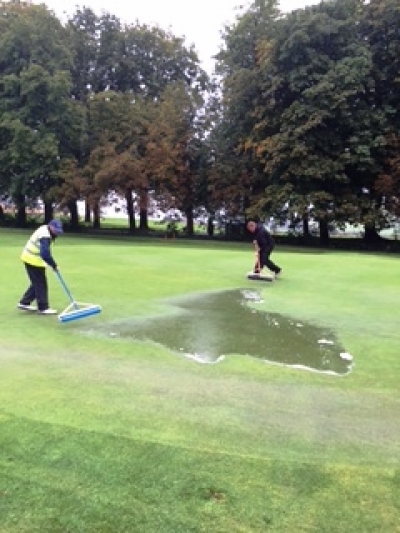 Just a couple of weeks after winning The Crug, also a better ball club competition, Matt Gardner & Craig Samuel made the same score to win yet another big competition in the club's calendar.

It was almost a surprise that the scores were so good seeing as the course played its full length, and there was no run on the ball after the bad weather during the previous 24 hours; the same storm forced the Tournament of Champions to cease play after one round the day before.

The course should have been further protected by some tough pin & tee positions but this did little to stop the prize winners shooting well below their handicaps, Matt & Craig's 8 under par total was just one shot better than Steve Davies and Phil Thomas with a group of players on 6 under all being separated by their scores on the back nine holes.

Whilst enjoying their post round refreshments in the clubhouse many golfers praised the green staff and remarked as to how well the course was looking and playing especially after the previous day's weather, this was reiterated in the Captain’s speech with further thanks to all those that helped to run the event on the day and make it the success it was.

If you want to get more information on our Open Competitions ‘Like’ our Facebook page and Bookmark our Website http://cradoc.co.uk (you can also enter your email here to get our newsletter)

More in this category: « 666 Resuts Ladies Am-Am Results »
back to top