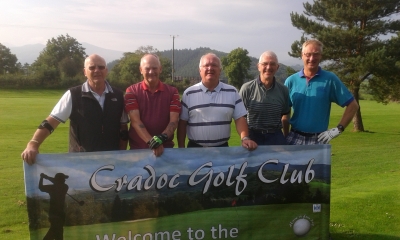 Home success for the last of our Open Competitions with high scores claiming all the places. Jeff and Tom headed the field with some great golf which saw them dovetail well and come in with an eight under par total beating the Builth pairing of Jackson & Saunders by a single point, Tanky Payne & Terry Eckley claimed 3rd by having the best back nine of the groups on 6 under par.

With the forecast changing from thunder storms to being one of the hottest days of the year, things looked good for the final of our Open competitions but unfortunately both forecasts were correct. The day started off lovely but the thunder rolled in around 11am and with the first crack of lightning play was suspended, thankfully it was short lived, we were able to resume play with only the smallest amount of disruption. There was no wind all day and even though there was no other threat of further thunder storms, the rest of the day remained cloudy with some short but sometimes heavy showers.

106 golfers played on the day and with some great scores the Seniors 4 Ball Betterball Open Day was once again a glowing success, especially as a further £200+ was raised via the raffle for the Captain’s Charity - Combat Stress.

Thank you very much to all those that bought tickets and we hope to see you all again for our Open Days next year.

More in this category: « Ladies Am-Am Results Rorke's Drift Results »
back to top