An International Occasion with Cradoc Ladies 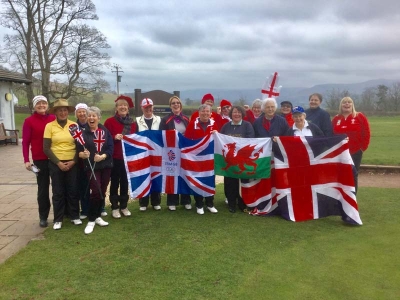 The Six Nations Championship may be over but Saturday 24th March saw an international event of its own at Cradoc. Sixteen ladies turned up for a competition which involved Wales versus The Rest of The World. It was a very colourful occasion - flags of various countries were draped over the golf bags, clubs had covers and clothes worn representing the various countries. As well as England and Scotland there were ladies representing countries as far away as Australia.

Firstly, a draw took place to determine partners on each side and then a second draw to determine which two played which team from the opposition. The match was played according to match play rules. Rivalry was intense and the results were as close as this year’s Six Nations!!

The first four players after a hard fought game resulted in a Welsh win - confidence was high in the camp and some of the Welsh thought it would be a whitewash. However, the second foursome evened it up with the Rest of the World producing an excellent comeback. They were four holes down after just six holes but dug in, fought back and ended up winning by 2 holes. The third game put Wales back in front 2 matches to 1 - it was now very tense. Everyone waited for the fourth match result to come in and here Wales managed to draw the game on the last hole. What a relief!!

Final victors were Wales by 2½ games to 1½. Another Welsh success in such a prestigious competition. Later the prize of a Welsh dragon was presented to the Welsh team in the clubhouse by Ladies’ Captain Steph Jenkins. Cymru am byth

More in this category: « Annual General Meeting 2018 Opening Day of the Season 2018 »
back to top