Opening Day of the Season 2018 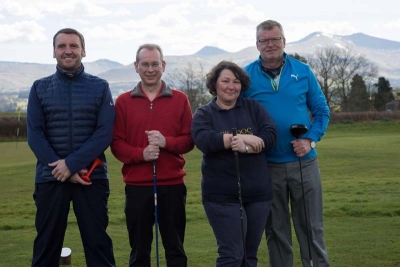 What a difference a week makes, last Sunday the course was covered in snow and this week it was bathed in sun which made it a very enjoyable day for the new Captains as they start the playing season. The Opening Day Texas Scramble is the first competition of the year and the 19 teams couldn’t have asked for a better day to play with hardly a breath of wind, this made conditions ideal for scoring. This winters weather has been a tough one for Steve and his team, especially the past month but they have worked together to prepare and present the course to the standard for todays competition, we just hope for some more of the suns warm rays so that the course can spring into summer.

The scoring was close with a lot of teams around the 60 mark but it was Brad, Brian, Adam and Matt that found the extra half a shot to pip Tomos, Bupendra, Alex and Mags to claim the title and get their seasons off to a winning start, well played everyone. A refreshing pre round drink and a delicious hot buffet in the clubhouse followed before the Battle Auction took place, this year saw a good increase in the money raised thus giving a good early boost to the Captains nominated charities.

There were only two teams with 2’s each team getting 35 balls.

More in this category: « An International Occasion with Cradoc Ladies Last Weeks Results »
back to top