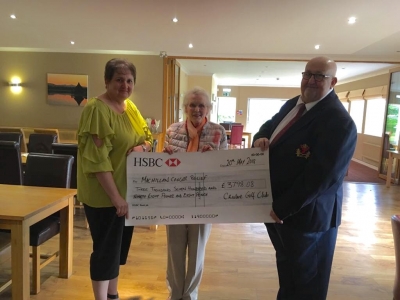 Sunday saw last years captain’s present the cheque to Liz George, the fund raising coordinator of their chosen charity, Tony Payne and Mags Jones had chosen Macmillan at the start of the year and through a variety of fund raising events had managed to collect £3798 during their year of office. Both Captains would like to thank all those that attended the functions through the year and those that kindly donated towards the total monies.

Sunday saw the MWGA stopping at Cradoc for it’s May meeting which always proves to be popular and although the weather forecast put doubt into some of those travelling from afar there were still over 100 players contending for the honours. The morning players had the worse of the weather with showers, one of them heavy enough the temporarily flood the greens but once the rain had stopped they cleared nearly as quickly. The day got gradually better from that time on and as the last players were coming into the clubhouse to enjoy the their post round refreshments the sun was just sneaking a last glimpse of the day.

Even after the battering the course got it still looked and played brilliantly with the ground still running but not being too severe if you hit a slope, the green’s were accepting a well hit shot and were true and fast, the only thing that got more difficult was the rough, if you were unfortunate enough to find it. Aled and Martyn ran out winners by a couple of shots gelling together to produce a 6 under par round of 42 points, Will and Matt were leading for most of the day producing a good round in the worst of the conditions with Wayne and Brian having to settle for 3rd pipping teams from Cilgwyn and Welshpool with a better back nine of 22 points.

We do hope you all enjoyed the day, despite the weather, and look forward to seeing you back next year.

The Inaugural Cup was donated by Ben and Florence Harries just after the club opened and is one of the few competitions which is open to both the men’s and women’s sections. After the slow start to the growing season the course is now gaining its summer bounce with the fairways playing hard and fast and if your not accurate with your approach an unkind bounce can leave you with a difficult recovery shot. Tomos started the round a bit bumpy but put in a strong closing nine, dropping only one shot to par coming in, and it was good enough to claim the cup, second spot went to Allan who found some of the form that had him playing off single figures last year, third was Shiva who was beaten on the count back on the back six, Gary was a further shot behind and Dave took the final spot on the leaderboard, Jan B was the best of the ladies playing to her handicap but unfortunately fell a couple of shots out of the frame.

Next Sunday is the Mens Mid Wales Alliance

More in this category: « Men's Texas Scramble Open Recent Results »
back to top