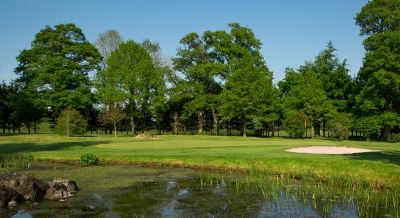 Historically the Ladies' Championship is played at the end of June, and this year it saw some of the hottest temperatures of the year. After the heat of the previous few weeks, the course had lots of run, but that also required skill and judgement, to cope with unusual conditions.

Twenty three players took part in the first round, and at the end of that the leaders included Sarah Parker, Jill Evans and Ronnie Cresswell. Together with fourteen players who had decided to play both rounds, they steadied themselves to compete in the second round. This round is seeded from the first round scores, so the leading three went out first. The afternoon was very hot and concentration was hard, but everyone acquitted themselves admirably.

The final results were:

Champion and winner of the Championship Salver : Sarah Parker (83+86)

Congratulations to the winners and everyone who played, making an excellent competition of this the premier event of the golfing year.

It was another very hot day at Cradoc for this event, but at times there was a little breeze which undoubtedly refreshed the players a little. There was still a lot of run on the course, which helps in some ways, but requires concentration and judgement with some unpredictable bounces.

52 players entered, with clubs represented as far apart as Pennard and the Grove Golf Centre, Leominster, together with a healthy home entry. The results are as follows:

Closest to the line on 15th hole : Fiona Jones (Cradoc)

There were only three 2s, each having eight balls:

The Mens Club Championship was a day for patience and a good course management as it looked more like a US open set up after the recent hot weather. The course was playing firm and fast and if you didn't measure your approach correctly you could have a difficult recovery from where your ball finished. After the first round Shaun Matthews was leading by one shot from Rob Evans with Huw Watkins a couple of shots further back and now it was time to make sure that any mistake didn't cost you more than a shot. Shaun played well throughout, driving the ball well and saving shots around the greens with a very sharp short game, that was until he got to the last couple of holes and after driving the ball out of bounds on the last he wasn't sure if that could cost him the title. Shaun recomposed himself and smashed the ball just short of the green, leaving a simple chip shot which he knocked close enough to leave a tap in for his bogey and then came the wait to see if anyone could catch him in the back of the field, it was close with Kev Winton producing a very good second round but unfortunately he came up a couple of shots short leaving Shaun the Club Champion for 2018. Well played Shaun on your win and well done to everyone who finished both rounds in such hot and difficult conditions.