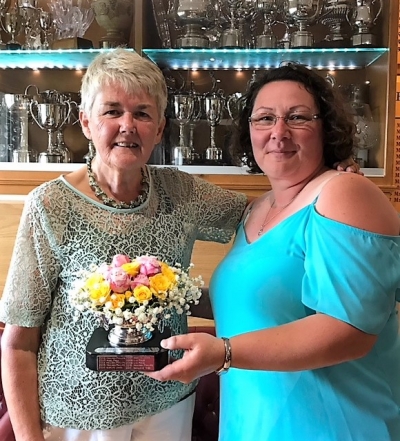 Lady Past Captains met on 31st July, for their annual gathering for a game and dinner. First begun in 1994 by Doreen Felton, this occasion is special to all of those who, in their turn, have been Lady Captains at Cradoc Golf Club. There were several apologies this year, from those unable to attend (and yes, they were missed!) but in warm sunshine, the game went ahead. Following the Mixed Open the previous Sunday, where she and her husband Tom came second, Lyn Price played some excellent golf and was the clear winner on the day with 38 points - and a drop in handicap - it is the fifth time she has won it!

Following the game, all who had played gathered for the dinner, and were pleased to welcome Nora Morrell (Captain in 1971 and 1980), and Dinah Thomas (Captain in 2000), who joined everyone for a most enjoyable meal and evening. Thanks to Steph Jenkins, the current Captain, who organised the occasion, who can play (but cannot win!) and who provided the wine on the table. Doreen Felton, sadly passed away earlier this year, but the tradition she wanted, of the previous year's winner returning the trophy filled with roses, still carries on, as can be seen in the photograph.

More in this category: « Cradoc Results Ladies' Away Day to Greenmeadows GC »
back to top