Ladies' Away Day to Greenmeadows GC 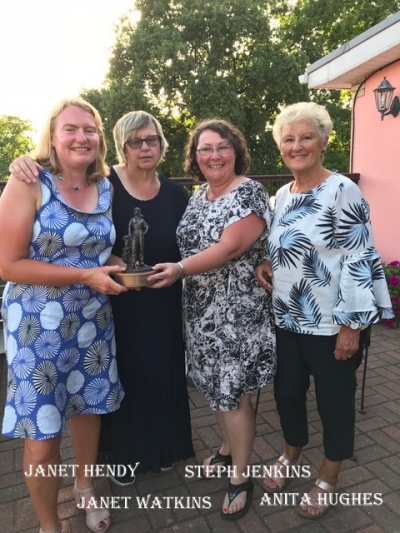 27 ladies met at Cradoc early one morning to board a coach taking them on the Away Day, the whole day being organised by the Ladies' Captain, Steph Jenkins. As usual at Cradoc, the day began with glasses of 'fruit punch', kindly provided by Sarah Parker, which was greatly enjoyed. The format for the day's play was to be individual stableford, with a blind draw for teams later to surprise everyone.

The weather was beautifully sunny and the course in good condition; apart from Steph, no one had played Greenmeadows before, but without exception everyone enjoyed playing it (although there are some very tricky holes!). Some players sparkled more than others - a couple spectacularly so - and the day's results were as follows:

Winners of the Away Day Trophy:

Janet Watkins, Janet Hendy and Anita Hughes with a whopping 117 points between them

Steph had provided a prize for the best individual score of the day, which went to Janet Watkins with 44 points (closely followed it has to be said by Janet Hendy with 43 points)

The whole day was a resounding success and it has to be said that there was a really lovely welcome from all departments at Greenmeadows GC.

Sincere thanks to Steph, who not only provided all the prizes, but also handed out bottles of water before play, and then at the dinner table each player found a 'goody bag' of golfing treats, all of which rounded off an excellent 2018 Away Day.

More in this category: « Lady Past Captains Rosebowl Caleb Roberts Trophy »
back to top