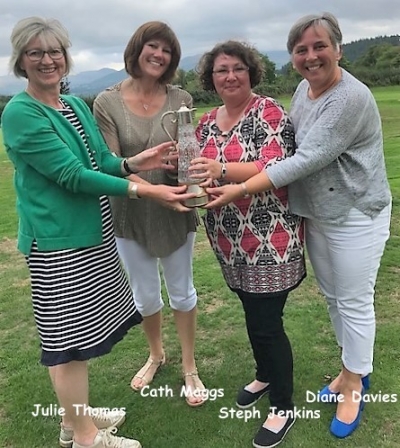 Whilst both ladies and gents all played Captains' Day on Sunday 19th August, the Ladies' Captain, Steph Jenkins had organised her part of the day so that the ladies could all play together; they were sent off the first tee by Steph, with a gift for each player. The format was best two stableford points' scores to count and there were some really exceptional scores returned.

Winners (and recipients of the Captain's Day Claret Jug trophy):

Julie Thomas, Diane Davies and Cath Maggs : 84 points (winning on b6 from)

Nearest the Pin on 12th hole

As players arrived at the 12th tee, Steph had provided very welcome glasses of Pimm's, together with a range of nibbles. Not just a few ladies found the Pimm's had an effect on their next tee shot, but clearly not the Vice Captain, Kay Coldrick, who won nearest the pin!

Following play, the Ladies' Captain Steph, had provided a sumptuous afternoon tea, everything having been made by herself and her mother-in-law. The spread was so delicious, that by the end very little was left!

On behalf of everyone, Kay Coldrick thanked Steph for all her hard work, both preparing for the day and everything she had done to make the day go so well; she underlined that everyone had really enjoyed themselves. Those that particularly enjoyed the day naturally were the prize-winners, who all received Nicholls' vouchers.

In her turn, Steph thanked everyone for the lovely presents and cards they had given her and for the donations (£105) towards the Captains' Charity.

More in this category: « Caleb Roberts Trophy Captain's Day Results »
back to top