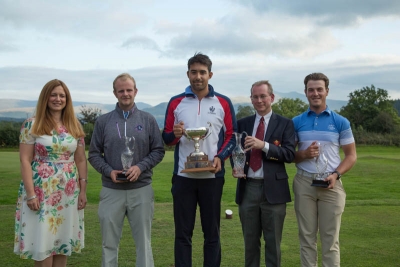 Today was the 40th anniversary of the Tournament of Champions an annual event at Cradoc who with sponsors Molson Coors have invited the club champions from across Wales to an end of season finale to see who would be crowned the Champion of Champions. Past winners include a host of Internationals and a couple of European Tour winners in Bradley Dredge and Stephen Dodd and this years competitors couldn't have asked for better conditions to play golf.

It was almost ideal weather there was light cloud with a few bright spells and a comfortable temperature all day, there was very little wind with the fairways running nicely and the greens were both receptive and a good pace. You had to be careful though if you took on too much with some of the tricky pin positions because they could cost you a bogey or two if you got on the wrong side of the pin.

The morning round is generally a time to position yourself and get a feel for the golf course and that it just what Laurence did, his first round score of 68 was the best of the morning and of the whole day. Lewis was second in the morning with a solid 69, his afternoon round of 74 meant that Adrian claimed second with his better second round score of 72 to follow his morning round of 71, both finishing on 143. Consistency was the key for the next four places with Jacob, Julian and Daniel all putting together rounds of 72 and 73 and having to be seperated by better back 18 and then count back on the last nine holes.

More in this category: « Ladies' AM-AM Mens 4BBB Open »
back to top