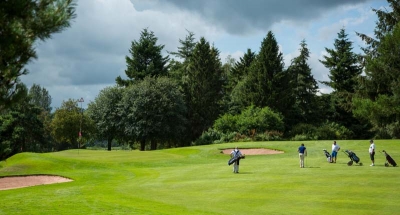 The scores were close this week at the top of the leaderboard, with 4 players tied on 37 points, Rob came out on top of these with the best back nine followed by Brian and the Ryan but it was Bradley who took the top spot with a good round of 38 points, 2 under his handicap. Bradley had 4 birdies in his round going out in 35 shots, 1 under gross (22 points), but coming back in 16 points which included a no score on the 14th. Last chance to get in the Winners Championship this weekend so get your names down on the board for Sunday's competition.

If we had believed the forecast we might have cancelled this competition but we only had to deal with some showers and a bit of breeze for the first hour or so after that the weather was clear, with little wind and even some warming sunshine in the afternoon. The course is in great condition with the greens running nicely although the rain has thickened up the rough and slowed the fairways down now and the cold nights have started to turn the colours in the trees which will make it look even more scenic than usual. Kumar topped the tree with a fine 40 points, 4 under his handicap, nipping it from Nathan by 1 shot with John and Shaun coming in a couple of shots behind on 37 points. Well played everyone.

Sunday was a day for exceptional scoring with one of the first groups coming in with a better ball score of 45 points, which on most days is going to win or at least put you in the prizes, Len and Tony's card stood for quite a while but just after lunch Chris and Jon took the front combing for a total of 46 points. In the bar Jon didn't think it was enough and admitted if a few putts had dropped on the closing holes they could have had 50 points. The top two scores came from the afternoon starters and although they had the same scores it was the back nine that sorted out the positions, John and Kev went out in 25 but only had 22 points coming back, whereas Russ and Paul went out in 22 and returned in 25 points. Well played everyone.

More in this category: « Mens 4BBB Open Mens Stableford »
back to top