Opening Day of the Season 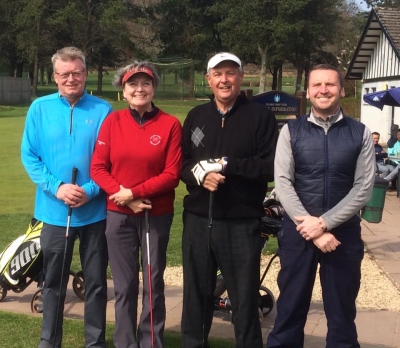 Sunday was the Opening day of the season Texas Scramble and the Captains were blessed with a dry day and although it was a grey cloudy start the sun came out for the end of the morning round and then stayed for the afternoon players. It was a great turnout for the with 29 teams of 4 playing throughout the day with 18 of those teams playing in the afternoon so they could stay for the Battle Auction in the evening. Everyone was very complimentary of how the course was looking and playing and with only a gentle breeze it was no surprise that the scores were low. Dai, Norman, Allan and Miriam scored a very good Gross 65 and with he full handicap allowance meant that they won by a couple of shots from Colin, Calum, John and Steph with Bradley, Mark, Simon and Ieaun only 0.2 behind in Third. After the golf everyone came into the clubhouse and sat down for a sumptuous hot buffet and with the beer and wine flowing it made for a very profitable night for the Battle Auction.

There were 3 teams with 2's, each team getting 28 balls

More in this category: « Winter Competition Results Wayleave Trophy »
back to top

The Club runs a very successful Intro Membership, primarily for those individuals who have never played golf before but would like to have a try without any full commitment to membership.
The cost is just £80, and includes a series of one-to-one personalised lessons with resident PGA Professional Richard Davies, and then access to the golf course for three calendar months to acclimatise yourself and improve your game.