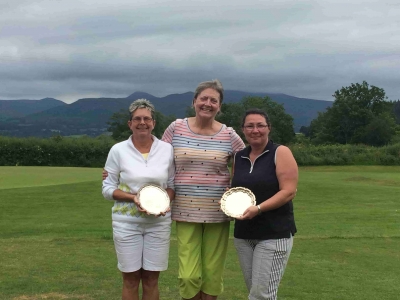 The Ladies' Championship is held over two days and it was fortunate that this year the weather held good for both days. With the greens' staff getting the course into tip top condition - though with the tees set back on the plates, the course played at its longest - there was all to play for.

At the end of the first day, there was not much between the challengers, and so the second day needed all their concentration. The players are seeded for the second round, reflecting play on the first day. Sarah Parker, Steph Jenkins and Ronnie Cresswell were in the first group out and were clearly the ones to watch! Scoring was nip and tuck during the whole round, but after a lucky break on the last hole (her ball came to rest by a staked tree), Sarah Parker retained her title as Cradoc Ladies' Champion with a five-shot lead, and in doing so won the Molly Williams Championship Salver. Steph Jenkins was the Championship runner up and also won the Lapthorn Salver (this has no money value) for the best 36 holes-nett. The 36-holes nett voucher went to Hazel Price, who had a great first round, which involved a handicap cut; Brenda Powell won the best 18-holes nett on the first day, and Ronnie Cresswell the best 18-holes nett on the second day.

The competition was close but the atmosphere in the clubhouse after the second day's play, was very warm and light hearted, with great camaraderie amongst all the players.

More in this category: « Jubilee Cup Medal Mens Club Championship »
back to top