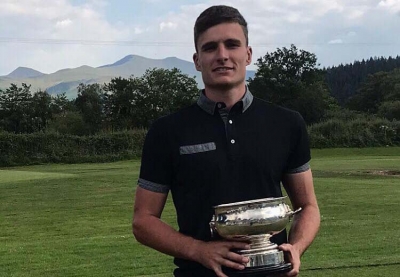 Yesterday saw the men play their Club Championship and they couldn't have asked for a better day, the sun was out for the majority of the day and there was just a testing breeze to make the golfers think about their approach shots. The course looked fantastic with all the hard work of the green-keepers over the last few months really paying off, although with the fairways running it was down to the pin positions to defend the course from really low scores. After the first round it was all to play for with Rob in the lead but John and Gajendra only a couple of shots behind but Rob was a model of consistency in the second round with a birdie and bogey on each nine and the rest were pars to end up with a level par round. Gajendra came in second with a good second round shooting a 74 to add to his first round 77 pushing John into third place after he shot a second round 78. The 36 Hole Nett competition was again won by Rob who's better second round meant his score of 143 was the best of them all with Gajendra again in second with Mike Harries in third following up his first round Nett 70 with a 73. The 18 Hole Nett competition was won by Ausan Limbu who's Nett 70 nudged Mike into second on the count back with John taking third with his Nett 71.

More in this category: « 2019 Ladies' Championship Beacons Cup »
back to top