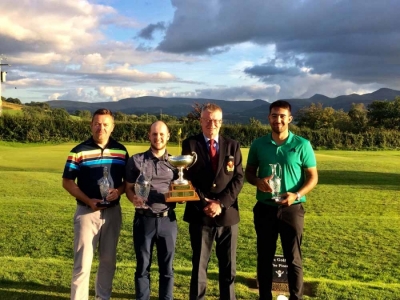 See below for a summary of the latest edition of this great event as well as a full breakdown of the day's scoring.

Saturday saw Cradoc hold the Tournament of Champions an annual event at Cradoc who with sponsors Molson Coors have invited the club champions from across Wales to an end of season finale to see who would be crowned the Champion of Champions. Past winners include a host of Internationals and a couple of European Tour winners in Bradley Dredge and Stephen Dodd and this years competitors couldn't have asked for better conditions to play golf.

It was clear that the scores were going to be good with such perfect weather and the comments of the competitors were very complimentary of the condition of the course, which was down to the hard work of the greens keepers all week in preparation. It was a surprise to see that only one player had broken par in the morning and it was down to the rest of the field to catch Julian if he slipped up in the afternoon. Julian was in the first group out and his playing partner Gareth got within one shot with the last to play but a bogey for Gareth meant he finished 2 shots back and both players had a long wait to see if anyone could get past them. Last years champion Lawrence had two level par rounds which meant he finished a shot behind Julian but pushed Gareth into third place, Zach finished with the same score as Gareth but lost out on the back eighteen to finish forth with Adrian posting the best of the afternoon scores to finish in 5th place.